Let’s start at the beginning with chicks in the brooder. Chicks don’t just peck each other for lack of something to do. There is an underlying problem causing them stress and/or aggravation. As any living creature, the first and foremost necessity for well being is comfort.

Providing chick starter crumbles and fresh water is a given, so we can certainly rule out hunger as the stress factor. It is my opinion there are two other very important factors to consider. Living environment and lighting, with significant emphasis on the latter. Overcrowding may or may not be the culprit in their acquired pecking behavior. However, if ample space is not provided away from a heat source, comfort is indeed compromised.

Always provide more than one feeder so weaker birds are not bullied. It only takes one drop of blood for the pecking disaster to begin, remember chickens are in fact cannibals. Also, by week 3, keep them busy with offerings of green grass, especially when you witness aggression.

Now let’s get to the nitty gritty of the pecking problem. Lighting, lighting, lighting! A brooder lamp is necessary for warmth but it shouldn’t be a blast of blinding light. Especially if you have the chicks in a small brooder and there’s no way to escape the annoyance.

I’m not at all a fan of the clear white bulbs and switched a long time ago to RED. They provide a calming environment, and as a bonus any minor pecking that’s caused an injury is better disguised under a red lamp.

You may want to make the switch from heat lamps altogether and switch to radiant heat from a Brinsea brooder. This will solve your fluctuating temperature problem, and providing you have a good number of chicks, it will be sufficient in keeping them warm.

Note: If it’s brutal cold… you can supplement with a low wattage red heat lamp. Low wattage heat bulbs are sold for reptiles, I usually use a 50 or 100 watt, depending on how cold it is.

For injuries, no matter how slight, I use a product called Blu-Kote. It has healing agents and the purple dye in the treatment hides the battle wounds. You’ll find this product at your local feed store.

I’m convinced that happy and content chickens start in the brooder. It’s easy to tell if the brooder has comfort zones. You should see some birds huddled together under the heat source, some resting alone, some scratching in the litter, and some eating. Watch your chicks, their behavior says it all!

Whenever there are new hatchlings there’s always something obstructing smooth sailing. This year the hot weather is hindering my ability to keep the almost 3 week old chick’s brooder below 95. I veered from my “always start chicks in mid October” rule of thumb on raising chicks. I know better, but that was too late to order the chicks I wanted. So now I’m frazzled trying to care my babies in temperatures that are soaring to near 100 and dropping some 40 degrees at night.

My indoor brooder is too small, the outdoor one is too big, standard 250 heat lamps are too hot, and a 100 watt isn’t hot enough at night. Oh my. Can’t say the chicks are near as stressed out as me, they don’t seem to mind fluctuating temps. But I do mind knowing that fluctuating temps are not in their best interest.  So far, I’m quite proud to say,  I haven’t lost any of my chicks.

This heat lamp thing is a giant pain, raising it, lowering it, up, down, up, down… it’s ridiculous! This is the last time I’m dealing with a heat lamp , I’m going switch to radiant heat using the Brinsea Eco Glow 20 Chick Brooder and be done with it once and for all.

As for the outbuilding where the brooder is located, it’s a bare bones shelter that offers zero help in maintaining a decent temperature. It’s not insulated, so it’s super hot in the summer and offers nothing more than wind and rain protection in the winter. I’m tired of that problem too…  so today I had the outbuilding insulated and drywall put up. I also ordered an evaporative cooler that has the ability to lower the inside temperature by 12 degrees, it’s expected Tuesday.

Buts that’s not all! The floor was particle board, and now I have vinyl floor covering. Thanks to Craigslist, I was able to find a handyman in one day… 18 guys responded to the ad. I’ll post pictures of the outbuilding as soon as I get everything back in order.

For every problem, there is a solution…  unfortunately it comes with a price, and now I’m broke.

Preparing for Next Season

October arrives! There’s a morning chill in the air that’s perfect for catching up on those long over due chores in the chicken yard.   The brutal sun and crazy high temperatures of summer baked tarps, buckets, and even the wood on the coop.  Now is the time to replace, repair, and prepare for next season. Temperatures are mild through March, the evenings may dip down to the 30’s, but freezing is just an occasional occurrence.

January and February is Arizona’s rainy season, but certainly nothing I would consider measurable. My hens have shelter from the rain, but they don’t much use it. They prefer to scratch around in the mud unless it’s literally pouring, which is close to never. However, with possible rains , the dampness and mild weather is perfect for pests.  Good chicken housekeeping  on my farm  includes a thorough inspection of the coop and birds for hitchhikers every October and March.  So far I’ve never had a problem with pests, but nevertheless,  it’s better to be safe than sorry.

My coop is roomy enough for all of them to fit inside, and the door is left open all day. The nest area is located at the rear of the coop and elevated about two feet.  That is the only area that I board up so they have protection from wind and rain.  I over-fill the nest area with Bermuda hay because it’s soft, and they all huddle together for warmth at night. I don’t use any artificial light or heat lamps.

All the birds look a bit frazzled from the hot summer months, especially Lady Madonna pictured below. All those long feathers on her head and neck spent a good deal of time wet from the water trough. But as all the others, she is getting her new feathers as the molt season has already begun.

By the end of October it will be in the upper 80’s for a high, and 50’s at night. I feel that is cool enough to introduce scratch to their diet as a treat.  The colder it gets, the more scratch I feed, assuming corn helps keep them warm.  If not, at least they‘re kept somewhat busy scratching around looking  for 10,000 kernels scattered about the yard.

Egg production is expected to drop substantially over the next month, this is normal, and directly related to the fall and winter seasons.  I’ve already noticed a 40% decrease in production just in the last two weeks.

Can’t help but notice that money is tight everywhere, and it’s no secret that shelf eggs are cheaper than nest run eggs.  The last few years my eggs were far more in demand than today, even though graded store bought are cheaper.  In order to be competitive with shelf eggs, my standard price of $4 now buys 17 ungraded nest run eggs instead of 12. I don’t weigh or measure my eggs, nor do a separate them by color, however I do package them for sale by size.

It is a little different raising chicks in the extreme heat of the Arizona desert. October is the best time to raise chicks in Phoenix,  it’s much easier to keep chicks warm than it is trying to keep them cool.  High temps in the day are in the mid to high 80’s and nights in the high 50’s and low 60’s. My brooder area is an addition off the house without controlled temps. Therefore, 80’s outdoors means 90+ in the enclosed off the house structure. I use a red low wattage brooder lamp at night about 20 inches above brooder and only natural lighting during the day.

At 3.5 weeks I move them to the outside coop. They will be confined there with a 250 watt red brooder lamp 3ft above ground which is left on day and night. Half of the coop is unheated. Temps in late Oct. are usually in the 80’s and at night upper 50’s.

At 4 weeks I open the coop doors to the chicken yard offering them the choice to fly the coop so to speak. They will venture out briefly then run back to the coop. After about 4 days they brave the outside world. Brooder lamp is still left on. Every night the coop doors close and all chicks are huddled together under the lamp.  It is now the first part of November and temps. are in the mid to upper 70’s, lows around 55.

At 5 weeks the birds are fully feathered, heat lamp off around 10AM, and turned on around 3PM. I find this important because the brooder lamp lures them in the coop as dusk approaches – exactly where I want them to go every night… always.

At 7 weeks the temps are high in the mid 60’s and lows in the 40’s. No heat lamp. However, it is now that I introduce an LED light where I want them to sleep at night, and eventually lay their eggs. The birds go the the light, even though it provides no heat. I choose an LED source of light because the batteries last a really long time, up to a month. My nesting area requires a ladder ( I use a sturdy tree branch) and as long as there is light up they all adapted quite easily to the change.

Dominiques, Ameraucana, and Orphingtons are the top egg producers on my farm, they are consistent egg layers for approx. ten months, taking two months off in the cooler months. Leghorns don’t seem to fair well in the heat, fatality rates have been high and I no longer keep them.  Rhode Island Reds and Ameraucanas are with out a doubt the most hardy. However, I find the RIR to be bullies and since I’ve eliminated them from my flock I have much happier birds. I keep the Polish varieties as well and find them quite hardy.

Note: Although I’m rather partial to the Orphingtons, they are indeed broody and can be troublesome when they won’t leave the coop during the hot months. 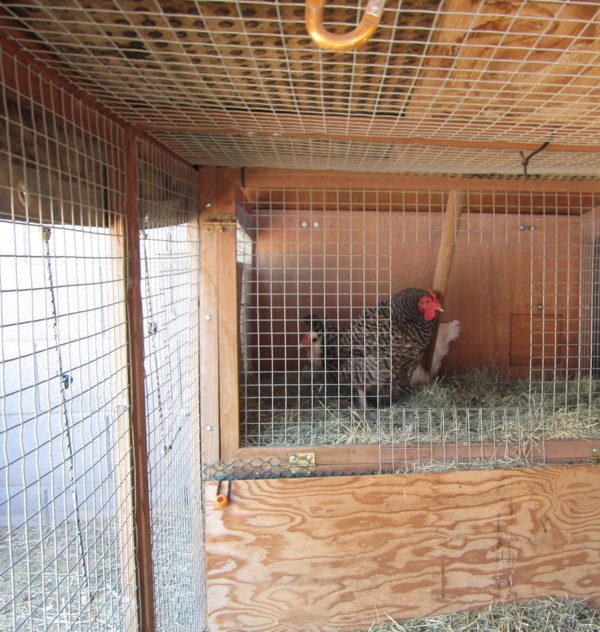 Mamma hen pictured below makes the newsletter this month for her strange behaviors. Not only is it bizarre that she produces polka dot alien looking eggs, but she finds them quite tasty too.  Immediately after she lays an egg, she breaks it and eats it – shell and all. I’m not sure what to think about that…

Penny Lane, AKA Freeloader pictured below also makes the news as the new non-egg layer of the flock. She’s either on strike for six months, or quit her job altogether.