An Informative Article on Why, When, and How Molting Effects a Hen’s Egg Production.

Every year your chickens will molt, in other words, lose their feathers and grow new ones. Unfortunately, it also means most hens will not lay eggs until their molt cycle is done. However, there are exceptions to that rule. There are hens whose rate of lay is not affected, but you can expect their molt time to last longer.

Late molters will lay eggs 12 to 14 months before they molt, and early molters might begin to molt after only a few months after their point of lay. Late molting is preferred; those birds usually have a more ragged feather appearance, but will generally be your better laying hens.  Early molters are just the opposite; they have a smooth and tidy appearance, but are usually poor layers.

Late molters will lay eggs longer before molting, and within 2 to 3 months will have completely shed their feathers. Their loss of feathers are replaced at the same time, this means a hen will return to full production quicker. Early molters lose their feathers just a few at a time and will drag out the molting process for as long as 4 to 6 months. These hens will generally be the poor producers in your flock.

There is a definite order in which feathers are lost, so it gives you a general idea of what molting stage they’re in.  Chickens lose their head feathers first, then those on the neck, breast, body, wings, and the tail is last.

Here in Phoenix, the molt season begins in early September and I’ll be raking up feathers all the way through October. The particular time of year your birds will molt depends on the climate of your geographic region.  Wherever you live, your chickens will not so subtly inform you when you can expect this yearly process to occur.

Note: A little crimped or rolled oats added to your chicken’s diet during molting may assist in feather growth. 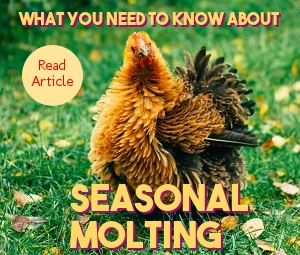